Artists & stock
In Russia, Malevitch’s Suprematist Manifesto was published in 1916. It was followed by other publications, each one bringing the theories behind Suprematism into sharper focus. Suprematism (from the Latin supremus, which stands above everything, which cannot be surpassed) made a strong statement against Classicism in painting, “fragments of nature hanging from hooks on your walls...” and suggested a new pictorial architecture. It should actually be seen more as a philosophical attitude than simply as an esthetic movement, because it was a reflection bearing not only on art but on the values of society as well. Malevitch depicted the universe as placed under the Absolute, which ignores material objects to connect with the original principle of the metaphysics of life. Austerity and mystical quest. After Malevitch, other Russian avant-gardists created suprematist works; these were abstract paintings, some of them totally disconnected from any actual reference, in which geometric shapes float and intermingle. Kasimir Malevitch declared the Suprematist project/adventure as officially terminated in 1920. 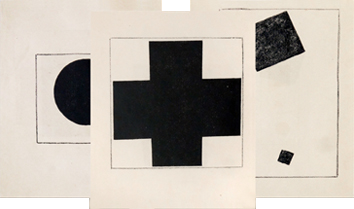