Artists & stock
In the early 1960’s, painter Ronald Kitaj decided on the name “School of London” for a group of six artists (himself, Lucian Freud, Michael Andrews, Frank Auerbach, and Leon Kossoff), all of them figurative painters and all of them living and working in London. More artists joined in later, among them Tony Bevan. As for Francis Bacon, his production stands halfway between abstraction and figuration. He produced works in series (portraits of popes, heads, etc). He especially focused on one subject, the human body, which by its very nature resisted the artist. In his paintings, Bacon represented physical reality much less than he did the human condition. The body is shown isolated within a well defined space and prey to constant metamorphoses. Bacon’s art lies in his ability to show the fragility of man when faced with his own pain and impulses, and as he becomes a slave to them. 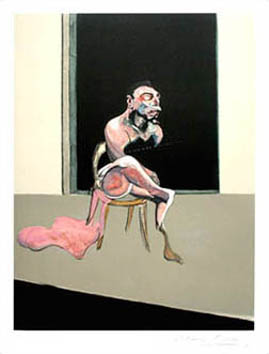