Artists & stock
In 1953-54, few painters get together in reaction to triumphant academisms of geometric art and expressionism which from their point of view had become their own caricature. From that time, Julien Alvard, critic and writer stands for this type of painting which avoids geometry and optical games as well as impasto mannerism. Everything happens in a narrow margin where the painter works on transparency with infinite precision. Extreme painters where risk taking is total, where space, color and in fact life are mixing in a inaccessible infinity. An exhibition called « Yann » is organised in 1959 in Paris by a gallery managed by Denise et René Breteau. It brings together several painters (Frédéric Benrath, Manuel Duque, René Duvillier and Fernando Lerin). That is when appears the term « Nuagisme » used first by a critic to make fun of this type of painting. This term will then be reclaimed to characterize this group of painters to whom few others will join later on (Pierre Graziani, René Laubiès, Marcelle Loubchansky, Nasser Assar). This lead in informal painting will become the ground for these painters to look deeper in their own personal works. 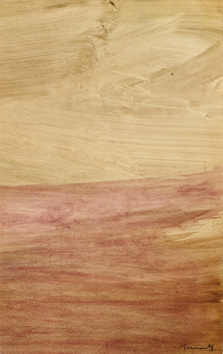