Artists & stock
The movement first appeared in the United States at the end of the 1960’s. In this perspective, the art work is a direct action on the landscape, an action that may be conceptual, minimal or monumental. These artists intend to both keep art outside of the conventional loci – museums and galleries – and establish an intimate communion with nature. To realize their works, some of them, Christo for example, bring in foreign elements to the natural site, while others use the elements and materials they find on the site itself. In the end, the landscape is modified either temporarily or permanently. Most often, they keep a record of their work with drawings, photographies or engravings, which eventually will also help fund their next project. 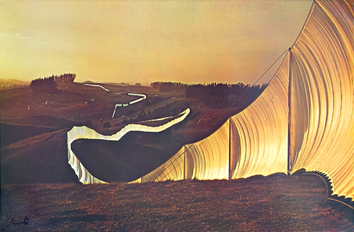