Artists & stock
The Italian criticism Margherita Sarfatti, the cultural representative and . . . mistress of Mussolini, forms a group of artists at the beginning of 1920s. This one will become real official movement in 1926. From 1923, a first exhibition of the group is held in Milan. The art of this group, which obtains at the same time subsidies of any order and commands of the State, becomes quickly representative of the fascist art. It has for currency to be popular and to attract the widest public possible. This movement is against the notion of Avant-garde and of the Futurism by taking up with the Classicism and the Italian Renaissance. The fascist period wants it, the style is monumental, archaizing and pompous. The painters put all their "creative" enthusiasm in the values of time: the nation, the family, the work, the courage, and all which can attract the people to his "good guide". The movement will disappear in 1933. 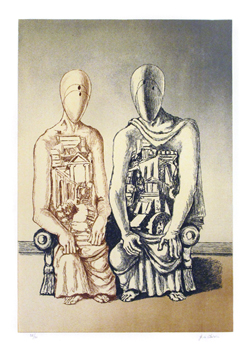