Artists & stock
The tormented art of Edvard Munch and the passionate accents of Vincent Van Gogh prefaced this movement, which developed in Germany and spread to the nordic countries between 1900 and 1925. Expressionists moved away from purely esthetic preoccupations and a carefree representation of reality. Various associations were created, which brought expressionists together; these gave life to the movement. Among them, Die Brücke (The Bridge), Neue Künstlervereinigung (New Artists’ Association), which later became Blaue Reiter (The Blue Rider). Der Sturm, a review and a gallery located in Berlin, played an important part in the life of the movement. The Expressionists’ main intent was to express their personal neuroses and, at the same time, their own preoccupations with and protest against the oncoming war.They were labelled “degenerate” by the Nazi government, which brutally squashed their movement. 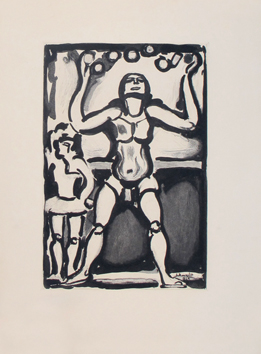