Artists & stock
Hayter (born in England in 1901, died in Paris in 1988) is considered as one of the creators of modern engraving. His famous Atelier 17 was one of the most significant studios of the 20th century. Both an innovator, with the technical knowhow of a wizard some said, and a great influence in the art world, Hayter was truly one of the main protagonists of the Surrealist movement. He moved to Paris in 1926 and opened his studio the following year. Atelier 17 soon played a pivotal role and became a center of creative energy. In the field of graphic art, it was the locus of experimentation. Chagall, Ernst, Giacometti, Lipchitz, Miro and many others were frequent visitors. Later in1940, Hayter moved to New York where he lived for ten years. Back in Paris in 1950, he opened a branch of his Atelier 17. He produced two major works that have become fundamental references in the art of engraving: New Ways of Gravure in 1949, and About Prints in 1962. Hayter was never much interested in promoting his own art. In spite of this, today his works hang in the Museum of Modern Art and the Guggenheim Museum in New York, and in the Pompidou Center in Paris. 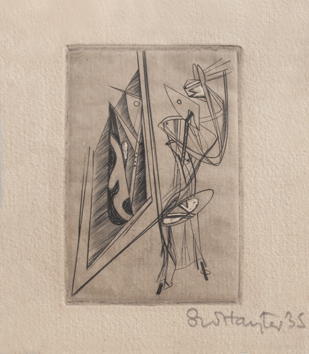