Die Werke
« The street is the largest art gallery in the world, » said one of them. Urban art or street art is both an artistic movement and a mode of artistic expression that has been asserting itself, or claiming to be so, since the end of the XXᵉ century. It is all forms of art made in the street or in public places and encompasses multiple techniques of expression such as graffiti, pochoir, stickers, posters, posters, collage, video projection, installations of all kinds including light, mosaic, ceramics and others. It is mainly an ephemeral art seen by a wide audience. The street artist's appropriation of a public place was born from a combination of aesthetic movements and a socio-cultural and economic context specific to New York in the 1970s; due to the availability of « glossy » paints sold in the form of aerosols (originally intended for painting cars), some of the graffiti will gain an aesthetic vocation in several countries on both sides of the Atlantic.
Although street art artists have in common an activity (legal or not) of urban intervention, they do not systematically resort to the letter - as was the case in the early days of graffiti art - and to the aerosol tool, dear to graffiti artists. The legal status of Urban Art is complex and can vary greatly from one country to another; the difficulty stems on the one hand from the fact that the author is generally anonymous, making it impossible to attribute copyright, and on the other hand from the fact that the making of the work is by nature illegal, calling into question its very permanence. Today, street art is increasingly present in auction houses and galleries, and some are in the process of « domestication » and losing their underground identity and their claiming values. 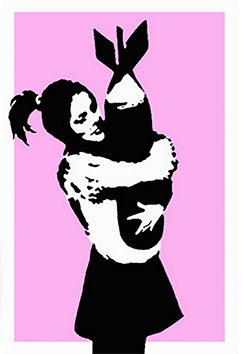